Writing is born of an inner impulse 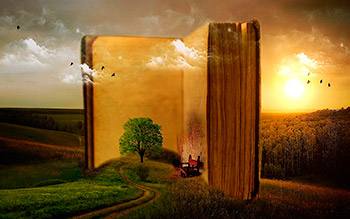 The urge to write is not something that is so easy to put aside. It always comes back, pushing you to leave a string of written words in any medium at your fingertips — how many times I’ve written things down on the first piece of paper I had at hand! But no one writes just because. If you have that impulse it’s because there is something inside you that wants to come out, that wants to show itself to the world. You have a message, something to say, something to communicate . A part of your interior doesn’t stop urging you to write down stories in which you always, always, leave something of yourself. Forget those theories that say that the writer is not reflected in his work. How could an author not be reflected in his work, a creator in his creature? Even in the effort to leave no trace of himself, he would be leaving it.

There are people who are annoyed by finding a moral imprint in a book. Do they think writing should be an aseptic art? No, what they are really looking for is that the book they read is in accordance with their way of seeing things. If someone feels bad about a priest coming out well in a novel, surely it is because he would have preferred him to come out badly.

These opinions, which are gradually penetrating society because they are simple and easy, are the ones that end up leading many writers to write with fear, frightened by criticisms, by not liking readers, by the rejection of society. Little by little, the pressures of the world and political correctness have cornered all that minimally rebellious. Today, we live in a world so politically correct that even those who call themselves antisystem are still products of that system which they say they reject. A large number of writers have also fallen into that vortex that devours everything which does not agree with the official opinion. They are very appreciated in “culture” supplements, even in political environments. Why not? They are instruments to spread the unique thought.

If the writer aspires to transmit his story, his inner world, he has to commit to writing without fear . Not to start cutting out, frightened, words and subjects that you know others will tell you are retrograde or so many other adjectives just as sonorous.

Because, my friend, you have a commitment to the cultural battle..

The role of the Catholic writer in the cultural battle

The fact is, we’re in the middle of a war. Yeah, I know. Being a Catholic means to be constantly on the warpath. The problem is that we are losing the cultural battle. And, for some reason I don’t know, from many instances (high and not so high) it has been renounced. It is not seen as something important. As if it were second class. And to think that is a fatal mistake. It is perhaps the most important battle. Everything we see, what we read, what we hear, influences us in some way. If we give up recovering those areas, we will have given up. Just as it sounds.

In addition, it doesn’t help that so many Catholics are carried away by the sentimentalism that is so fashionable. We are going to find a generation of Catholics who accept anything based on sentiment. Without reasoning. With stupid slogans like “less to think and more to feel”, “do what your heart dictates” or the so hackneyed “have fun, is all that matters” we get a wonderful horde of sheep ready to enter the stable of unique thought.

Writers can change the world. We have already seen it with the ideology of gender or the New Age, both loaded with cheap sentimentalism. Children’s stories, textbooks, novels, series scripts and films that spread absurdities like these in a way that, little by little, are penetrating minds.

They are changing the world.

This shows that, as Christ said, “the children of this world are more prudent in dealing with their own generation than are the children of light” (Lk 16:8). They know how to take advantage of all the means at their disposal, while we stare. But we can not stand with arms folded, right?

You who write, write without fear to change the world for the better . Write to reflect your vision of the world. You won’t have to work hard, it’s natural. On the contrary, you would have to make an effort not to do it. But beware, you are going to reflect what you have inside. Whatever you really believe in.

That message may reach a few, yes. But who knows? It may also reach many. In any case, it will be worth it.

Jorge Sáez Criado has a double life. Some days he writes about spirituality and others he makes imaginary characters suffer and face epic battles between good and evil. A computer scientist by day and a writer by night, this father of a large family writes stories with a markedly positive outlook on life without neglecting one of the main functions of fiction: to explore the truth.