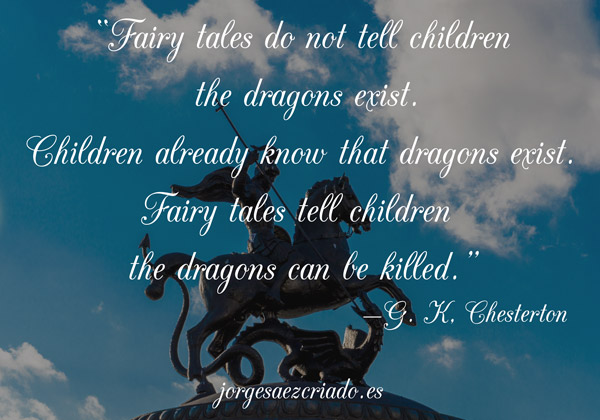 Stories and legends, both for children and adults, in which the hero in question must face a dragon are not uncommon. Already at the time, the great (in at least two senses) G. K. Chesterton left for posterity a quote that seems to me a good starting point:

Children already know that dragons exist. They are perfectly aware that there are bad and unfair things. That some people behave well but others behave badly.

They are not alien to the problem of evil. Not at all.

In the West, the dragon clearly represents evil. We could talk about the extent to which it is positive or negative for there to be a certain vindication of the figure of the dragon, making it become a kind of wise and sympathetic being, unjustly persecuted. However, this is not the aim of the article. Just make it clear that traditionally the dragon has represented evil and that I agree to maintain that interpretation.

We are going to find a multitude of dragons in our lives. Although it’s true that many times what is presented as a dragon does not measure up and is, at best, a snake with hypertrophy. Or without it. But the case is that we are going to find dragons: big, small, medium, evident or camouflaged.

But the dragons can be killed. And that quote from Chesterton gives us the importance of traditional stories: teaching children the essence of good and evil. And that evil does not have the last word. The evil they already know, let’s remember.

Evil does not have the last word.

By the way, don’t you think that lately children’s stories tend to be more and more diluted? Have you noticed that they have even come to seek to change or even prohibit the traditional stories?

Yes, dragons exist. And yes, they can be defeated. We have to burn that. Both to teach it to our children and to keep it in mind for us as parents: if they see us fight, they will learn to fight.