A small story that expands on the story of one of the characters in Apocalipsis and Llorando Sangre: Józef Nowak, translated by Lisa Nicholas. You want to know how the stigmata appeared to him? Read on. 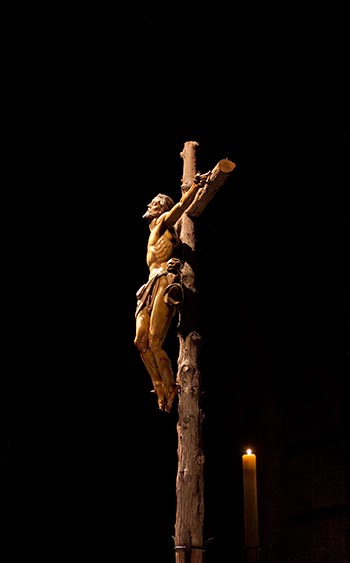 “My Lord and my God, may all my intentions, actions, and operations be ordered purely to Thy service and to the praise of Thy divine majesty.”

Józef Nowak was in his room at the Jesuit seminary, where he had been doing the Spiritual Exercises for the first time. A month of solitude and silence, a month of prayer to discover God’s will for him. To confirm that the way forward for him was to join the Society of Jesus.

He was now in the third week of the Exercises that St. Ignatius of Loyola had developed—the meditations of the seventh day, the Passion of Christ. As in each of the previous ones, he began by imagining the place where the object of his meditation had occurred and by asking God to grant him
sorrow, tears, and suffering for the tormented Christ.

As soon as he began to imagine the scenes of the Passion, he felt his heart expand. He saw himself with Jesus at the Last Supper. He watched Judas leave to betray the One who was Love. He saw Jesus loving even to the point of offering His own body and blood as food. He saw Him wash the feet of His disciples. Even his own. The Lord cleaning the feet of His creatures. Just as a father does for his children.

Then he was in the Garden while He was suffering. Nowak knew that He suffered on account of him. He himself, with his sins, was the reason this was happening. He tried to accompany Him in His suffering. He tried not to leave Him alone in His pain.

Tears were not long in coming. He felt them gushing as if straight from his heart, with no control whatsoever. Tears of a painful love.

“Come with me,” he heard in his mind.

Each time he sank deeper into his contemplation. He could no longer tell whether he was imagining the Passion or whether, in some way he couldn’t comprehend, he was actually there. With Him.

“I’ll go wherever you tell me to, Lord. I’ll do whatever you want me to do. I am yours, my God and my Lord.”

Suddenly, something was different. He felt confused, sad, dismayed. It was as if each insult directed at Jesus were directed at himself. The first lash of the scourge took his breath away. The pain was unbearable.

After the scourging, the mocking of Pilate’s guards. He could feel each gob of spittle, each slap. The spines on the crown of thorns dug into his scalp, drawing drops of blood that he could feel running down his face. The shame when Pilate displayed Him before the people. The same people He had come to save. The crowd crying out for him to be killed.

Shame and an immense sadness for his people. And yet, there was still more. Something more.

The Cross bore down on him with its horrible weight. It seemed as if he, too, were physically carrying it. His confusion grew as the people all around hurled insults and the soldiers whipped him to make him move along.

They reached Golgotha. There, while they were nailing Christ to the Cross, he no longer felt as He did. Like a lamb led to the slaughter, He had not opened His mouth, except to utter a blessing.

“Oh, my God!” he thought, with tears running down.

They raised the Cross. At the foot stood Mary and John. And he, too, who couldn’t take his eyes off the One before him, the One who died for him and saved him. His divine blood trickled from His head, His hands, His feet.

Nowak stretched out his arm to touch the feet of Jesus, the nail that held them to the wood. He gazed up into the face of Jesus.

And He returned that gaze.

A look of love, eternal, infinite.

Eyes that took in the whole universe as if it were but a single atom.

The gaze of God upon one of His creatures.

He got lost in His gaze, like a tiny boat lost on the ocean.

And then, in his own flesh, he felt the pain of the Crucifixion. He felt the nails cutting through his hands and feet, ripping him apart yet binding him to the Cross. The scornful laughter of the executioners and the others who were enjoying the suffering of the condemned men. The suffocation of being on the Cross . . . The pain was unbearable, but it was not merely physical. It was also a suffering of the spirit. The sense of abandonment, the weight of sin . . . Everything that Christ had gone through, just to free us from sin and death. The price of redemption. All bound up in love. Even him. He accompanied Jesus to the end.

When he came to, he was sprawled across the floor of his room, blood flowing from his head, his hands, his feet, his side. In some manner both mystical and corporeal, he had managed to identify with Christ, and He had granted him the gift of sharing His own fate, a destiny of love for mankind. From that moment on, he would bear in his body the signs of the suffering and the inconceivable love of Christ for His creatures, as well as the certainty that he was unworthy to bear them.